TEHRAN(defapress) – The Danish Prime Minister called Donald Trump's interest in buying Greenland "absurd" the same day the US president confirmed he had discussed the possibility of the US purchasing the country -- albeit, Trump said, it wasn't a high priority for America.
News ID: 78412 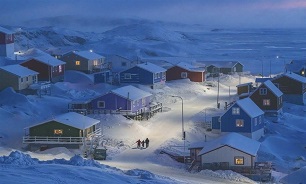 Trump has on multiple occasions brought up buying Greenland -- an autonomous Danish territory -- from the Danish government and the White House counsel's office has looked into the possibility, two sources told CNN last week. On Sunday, Trump confirmed his interest in buying the country, telling reporters that Greenland is hurting Denmark.

"We are good allies with Denmark, we protect Denmark like we protect large portions of the world, and the concept came up," the President said in New Jersey before heading to Washington. "Strategically it's interesting, and we would be interested, but we will talk with them a little bit."

"It's not number one on the burner, I can tell you that," Trump said.

Frederiksen on Sunday said conversations around the US buying Greenland were "an absurd discussion."

"(Greenland Premier) Kim Kielsen has of course made it clear that Greenland is not for sale. That's where the conversation ends," she said.

Trump's talk about buying Greenland, which was first reported by The Wall Street Journal, would not be the first American effort to purchase Greenland. Though President Harry Truman dodged questions about his pursuit of control in the region, the United States allegedly tried to buy Greenland in 1946. And in 1867, Secretary of State William Seward showed interest in purchasing the island.

"They tried to buy us in 1867, during (the) Second World War, and now they are trying again," local Kulusuk resident Bent Abeelsen told CNN last week. "Not gonna happen."