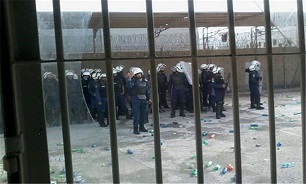 Over 400 inmates started an open-ended hunger strike on Sunday morning, joining 196 others who had began refusing food a short while earlier on Friday, Press TV reported.

They are also voicing solidarity with 15 political prisoners who are being held incommunicado at Jaw prison and who initiated the hunger strike campaign on Thursday.

Bahraini detainees complain about harassment during family visits, saying that they are prohibited from practicing their religious rituals in jail while being subjected to beatings, psychological pressure, and the confiscation of their belongings.

In a letter delivered to the Bahraini media, Hasan al-Ghsara, one of the 15 political inmates said that the group had decided to refuse food after spending two years in “systematic isolation” at Jaw prison.

He said that the prisoners were held under “harsh conditions,” and particularly faced “the denial of basic rights guaranteed in accordance with international and local laws.”

Bahraini authorities, he said, subject the prisoners to “psychological torture” and put them under a “monitoring process” in violation of their privacy.

“We have been placed under strict security restrictions in private rooms without being giving rational reasons for that; we suffer from clear discrimination,” read the letter. “We are not treated like the rest of the prisoners. We have been placed in rooms where we are prevented from freely practicing our religious rituals.”

Since February 2011, Bahraini people have been regularly holding peaceful protest rallies, demanding that the Al Khalifah family relinquish power and let a just system representing all Bahrainis be established.

They have also been complaining against widespread discrimination against the country’s Shiite majority.

Manama has responded to the demonstrations heavy-handedly. The authorities have detained rights campaigners, broken up major opposition parties, revoked the nationality of several pro-democracy activists, and deported those made stateless.