TEHRAN (defapress) – Syrian army troops seized a major territory in the northwest where they had encircled militants on Friday, reclaiming several towns and areas.
News ID: 78443 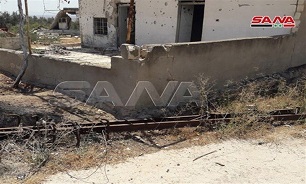 The pocket that came under the control of the military on Friday includes a few towns and their environs, which militants had held since the early years of the foreign-backed war.

The army imposed “a choking siege” on insurgents in the Hama countryside on Friday morning, state-run Ikhbariya said.

The capture of six towns and nearby hills expanded state control of a highway running through them, which stretches from the capital Damascus to Aleppo city, it added.

“The north Hama countryside is now fully safe”, the channel’s correspondent said in a live broadcast from te town of Kfar Zita. He said soldiers were searching for landmines.