TEHRAN (defapress)- Palestinian Authority President Mahmoud Abbas said millions of Palestinian “fighters” will one day enter the occupied Jerusalem al-Quds, as the occupied territories belong to the Palestinians and they shall remain there forever.
News ID: 78458 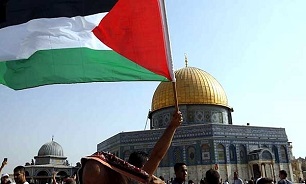 “We shall enter Jerusalem — millions of fighters! We shall enter it! All of us, the entire Palestinian people, the entire Arab nation, the Islamic nation, and the Christian nation… They shall all enter Jerusalem,” Abbas stated in an address to a group of Palestinians during his visit to Jalazone Refugee Camp near Ramallah earlier this month, a video of which was uploaded to his Facebook page, presstv reported.

He made the comment in reaction to the audiences who were chanting "To Jerusalem we march! Martyrs by the millions!"

"No matter how many houses and how many illegal settlements they declare that they [plan to build] here and there – they shall all be destroyed, Allah willing. They will all go to the garbage bin of history,” Abbas added.

Israel occupied East Jerusalem al-Quds during the Six-Day War in 1967 and later annexed it in a move not recognized by the international community.

The Palestinians, however, view al-Quds’ eastern sector as the capital of their future sovereign state.

In his address, the PA president also lashes out at the recent international conferences held in Poland and Bahrain, where the US unveiled the financial part of what the Donald Trump administration calls the “Deal of the Century”, and condemns the labeling of Palestinian martyrs as “terrorists”.

“We will not accept their designation of our martyrs as terrorists. Our martyrs are the martyrs of the homeland," Abbas notesd, stressing, “We will not allow them to deduct a single penny from their money. All the money will go back to them, because the martyrs, the wounded, and the prisoners are the most sacred things we have.”

The two-day so-called Peace to Prosperity workshop opened in Bahrain on June 25.

The Palestinian leadership boycotted the meeting, leading critics to question the credibility of the event.

Palestinians staged rallies across the occupied West Bank in protest against the conference and participation of Arab delegations.

Demonstrators gathered in Ramallah, Bethlehem, Jenin, al-Khalil, Tulkarm, Salfit, Qalqilyah and Ariha, while a general strike was staged in the besieged and impoverished Gaza Strip.

“Any plan that includes the liquidation of the Palestinian cause … is rejected by the Palestinians and is not debatable or negotiable,” Saeb Erekat, Secretary General of the Palestine Liberation Organization's (PLO) executive committee, announced in a statement.