US Return to N. Deal Tehran’s Precondition for Talks

TEHRAN (defapress)- Iranian President's Chief of Staff Mahmoud Vaezi said on Wednesday that Washington must first return to the nuclear deal of 2015, officially known as the Joint Comprehensive Plan of Action (JCPOA), and compensate for its past mistakes if it is honestly after holding talks with Tehran.
News ID: 78530 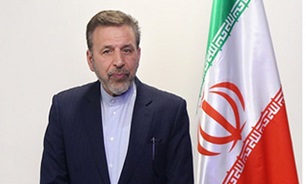 Speaking to reporters today, Vaezi said US should remedy its failures if it prefers a new way, underlining that the US return to the JCPOA is the precondition for Iran-US talks.

He added that meeting with the US officials will solve no problem and that the US must come back to P5+1 negotiation table and respect its commitments to the Joint Comprehensive Plan of Action to allow Iranians to benefit from the JCPOA.

Iranian President Hassan Rouhani and Foreign Minister Mohammad Javad Zarif are seeking to use all instruments for lifting sanctions, he noted.

The top official said that Zarif held talks with French President Emmanuel Macron in France aimed at realizing Iran's rights in the nuclear deal and lifting US cruel sanctions.

Elaborating on the details of the third step of reducing Iran nuclear-related commitments, Vaezi said if Tehran sees no progress it will definitely implement the third step.

Elsewhere in his remarks, Iranian official said an Iranian economic delegation will visit France next week.

In an interview with the German daily Süddeutsche Zeitung on Monday, Iranian Foreign Minister Mohammad Javad Zarif said that his country is unwaveringly going to take the third step in scaling back its commitments under the nuclear deal of 2015 if Europeans keep failing to deliver on their promises to Tehran.

The third step will be taken on September 6, Zarif underlined.

Zarif further said if Iran comes to an agreement with Europe and the European side begins to implement it, we will not take this third step, without elaborating.

The top Iranian diplomat lashed out at the US for unilaterally leaving the nuclear deal, officially called the Joint Comprehensive Plan of Action (JCPOA), and pushing the European signatories to follow suit.

The Americans, he said, need to stop preventing others from fulfilling their obligations or pushing them into breaching the JCPOA.

Tehran has rowed back on its nuclear commitments twice in compliance with articles 26 and 36 of the 2015 deal.

Iran says its reciprocal measures will be reversible as soon as Europe finds practical ways to shield the Iranian economy from unilateral US sanctions which were imposed last year when President Donald Trump withdrew from the 2015 nuclear deal.

The European signatories to the JCPOA have so far failed to uphold their commitments. They have expressed vocal support for the deal, but failed to provide meaningful economic incentives as required under the nuclear agreement.

The Europeans have already missed a 60-deadline set by Tehran, prompting Iran to go for the second phase of cutting its commitments on July 7, which marked the start of a second such deadline for them.

As a first step Iran increased its enriched uranium stockpile to beyond the 300 kilograms set by the JCPOA.

In the second step, Tehran began enriching uranium to purity rates beyond the JCPOA-limit of 3.76 percent.

Elsewhere in his remarks, the Iranian foreign minister did not rule out the possibility of a conflict breaking out in the Persian Gulf region, saying the hawkish B-Team seeks to drag US President Donald Trump into a war in the region.

“There is always a chance for [unlikely] events to take place and people I have called B-Team want to lead Trump to a war against his will. So we have to be very careful. We are not after a war but we defend ourselves,” he added

Last Saturday, a senior Iranian Member of Parliament (MP) said that replacing old centrifuges with advanced ones, whose enrichment capacity is 48 times more powerful, is one of the options of Tehran for the 3rd step of scaling-down its nuclear commitments.

“In the third phase, we will have many options, including the adoption of advanced centrifuges,” said Mohammad Ebrahim Rezayee, who heads the nuclear committee of the Iranian Parliament’s National Security and Foreign Policy Commission, on August 17.

“While we are still using the old IR1 centrifuges, the more advanced ones, namely the IR6 and IR8 centrifuges, are ready for implementation,” he said, adding that the new domestically-manufactured centrifuge machines have the capacity to increase the capacity to enrich uranium 26 to 48 times more than the existing IR-1 machines.

Rezayee said Western countries should be aware that Iran slowed down its nuclear developments and halted some of its centrifuges to fulfill its JCPOA commitments, while such measures are "all reversible" and the country will resume them step by step.