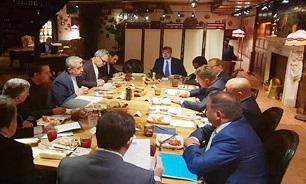 Russian Energy Minister Alexander Novak and his Iranian counterpart, Reza Ardakanian, held a meeting in Moscow on Monday, where the two sides discussed the development of joint energy investment projects, including the construction of a 1400-megawatt thermal power plant in Sirik County, Hormozgan Province, and the electrification of Garmsar-Incheboron rail route.

Under an agreement signed between Iran and Russia, Moscow was set to allocate a one-billion-dollar loan to Tehran for construction of a 1400-megawatt power plant in southern Iran.

During the meeting, the two ministers also conferred on the agreements reached at the 15th joint economic cooperation commission of Iran and Russia.

The Russian minister, for his part, voiced satisfaction over the completion of Iran’s domestic legal process for joining the Eurasian Economic Union (EAEU), saying the interim agreement, which would lead to the formation of a free trade zone between Iran and the regional union, would officially take effect on October 26.

Novak then called for the implementation of a trilateral agreement between Iran, Russia and Kazakhstan for the temporary transit and swap of wheat, which Ardakanian promised to seriously follow up on.

The Russian energy minister further welcomed bilateral cooperation on aerospace, and called for cooperation in the field of digital energy, which was welcomed by the Iranian side.

Ardakanian also invited his Russian counterpart to take part at the 19th Iran International Electricity Exhibition, slated for Oct. 30 to Nov. 2, which was warmly welcomed by the Russian side.