Iran to Put Aside N. Deal-Related Restrictions on R&D Program

TEHRAN (defapress)- Iranian President Hassan Rouhani declared that the country will no more abide by restrictions put on its nuclear R&D program based on the nuclear deal as the third step to react to the Europeans' non-commitment to the Joint Comprehensive Plan of Action (JCPOA).
News ID: 78598 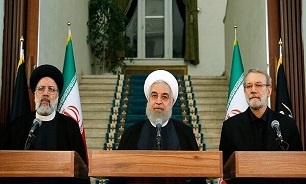 Rouhani made the remarks in a press conference after a trilateral meeting with Judiciary Chief Seyed Ebrahim Rayeesi and Parliament Speaker Ali Larijani in Tehran on Wednesday.

According to Rouhani, the third step will be taken on Friday, September 6, after talks between Iran and the G4+1 group of countries did not bear "the desired result".

"We took the first step in reducing our commitments, and gave the G4+1 a two-month deadline. Then we went ahead with the second phase, giving them another two-month deadline. In the four-month period, we held negotiations with the G4+1, including the European Union and the three European countries in particular," he said.

However, Rouhani added, Iran did not achieve the desired result, and will thus take the third step on Friday.

In the third phase, Rouhani said, "the Atomic Energy Organization of Iran (AEOI) will be obliged to immediately start research and development on whatever technical needs the country has, and set aside all R&D commitments stipulated in the JCPOA."

The president said the AEOI is expected to expand its "R&D on various new centrifuges and whatever the country may need for uranium enrichment" at a fast pace.

"A major part of negotiations with the G5+1 (Russia, China, the US, the UK, France, and Germany) was focused on the R&D timing... All the R&D timings in the JCPOA to which we committed ourselves will be fully lifted as of Friday," Rouhani said.

"We will carry out whatever we need technically... under the supervision of the International Atomic Energy Agency (IAEA) and within a peaceful framework," he went on to say.

Rouhani at the same time stressed that the cuts are reversible if other parties to the JCPOA fulfill their obligations.

"We still give another two-month time to the P4+1, during which we may return to our JCPOA commitments in case we reach an agreement," he added.

Earlier in the day, Rouhani had stated that the third phase will begin as it was "unlikely that we will reach a final agreement with Europe today or tomorrow".

The president described the third phase of Iran’s commitment reductions as “highly important in nature,” emphasizing that this would the “most significant step that we take” and would “have extraordinary effects”.

This phase, Rouhani added, will "accelerate" the activities of the AEOI.