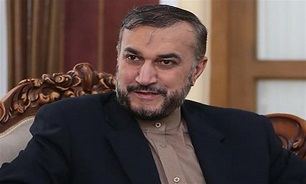 “Undoubtedly, the hawkish #Bolton's firing is the outcome of internal differences btw the White House & #Trump,” Amir Abdollahian said in a post on his Twitter account on Wednesday.

“What is important is the change in the US behavior, not replacement of persons & parties in America,” he added in his tweet.

Iranian Foreign Minister Mohammad Javad Zarif has always blamed Bolton for the US hawkish policies toward Iran and referred to him as a member of the B-Team.

US President Donald Trump, who said he had disagreed “strongly” with Bolton on policy, announced on Tuesday via Twitter: “I asked John for his resignation, which was given to me this morning.”

A replacement -- the White House’s fourth national security chief in less than three years -- would be named next week, Trump said.

Bolton, who had been scheduled to give a press conference at the White House on an unrelated matter, denied being fired and insisted that he had resigned.

The developments came against the backdrop of increased tensions between Iran and the US with Washington imposing new sanctions against the Islamic Republic.