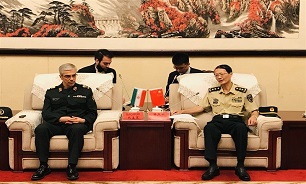 Speaking at a meeting with the president of PLA National Defence University in Beijing on Thursday, Major General Baqeri said in the past few years, the relations between Iran and China have been improving day by day and moved toward becoming "strategic".

Baqeri said the armed forces of the two countries have great relations, especially in training and scientific fields.

The top commander said the world is changing and countries are facing various challenges that need research for which universities are the best places.

The Chinese official, for his part, said the good ties between Tehran and Beijing will bring about peace and stability to the region.

Iran’s highest-ranking military commander and his accompanying delegation arrived in Beijing on Wednesday for a series of talks with senior Chinese officials.

Major General Baqeri has visited the East Asian country at the invitation of Chief of the Joint Staff Department of China’s Central Military Commission Li Zuocheng.

His negotiations are expected to focus on regional developments, enhancement of Iran-China defense ties, and promotion of cooperation between the two countries.

Iran and China have close diplomatic, economic, trade and energy ties, and in recent years have developed their military relations as well.