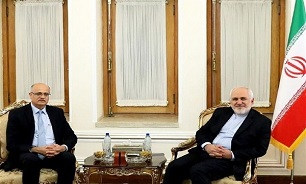 Foreign Secretary of India Vijay Keshav Gokhale who has travelled to Tehran for the 16th round of political consultations between the foreign ministries of Iran and India met with Zarif on Sunday morning.

In the meeting, the two sides talked about various issues, including bilateral ties between Tehran and New Delhi, regional issues, and issues of mutual interest.

Zarif highlighted the growing trend in the cooperation between Iran and India in various fields, expressing hope that the two countries would employ the potential for further cooperation.

The Iranian foreign minister also voiced concern about the condition of people in Kashmir, hoping for the improvement of the situation in the disputed region.

In comments on August 21, Leader of the Islamic Revolution Ayatollah Seyed Ali Khamenei called on the Indian government to adopt a fair policy towards the people of Kashmir and avoid harassing its Muslims.

“We have good relations with the government of India, but the Indian government is expected to adopt a fair policy towards the noble people of Kashmir, so that this region’s Muslim people would not be oppressed,” Ayatollah Khamenei underlined.

In early August, India's Hindu-nationalist government revoked Article 370 of the constitution, which formed the basis of Kashmir's accession to India and gave the state of Jammu and Kashmir its own constitution and decision-making rights.