US 'Posturing' by Sending Troops to Saudi Arabia 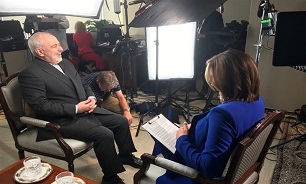 "I think it's posturing. I think it's all going the wrong direction in addressing this issue," Zarif said in response to a question on how Iran sees the development in an interview set to air Sunday on CBS' "Face the Nation."

The Trump administration has blamed Iran for the Sep. 14 attacks by Houthis on Saudi Arabia’s Abqaiq plant and its Khurais oil field that adversely affected up to half of the supplies from the world’s biggest oil exporter.

US President Donald Trump on Friday approved the deployment of US troops and missile defense equipment to Saudi Arabia and the United Arab Emirates.

Zarif denied that Iran had anything to do with the attacks and said it will likely not accept the results of any United Nations investigation into them. UN Secretary-General Antonio Guterres said on Thursday that experts been dispatched to Saudi Arabia to investigate.

"That means that there won't be a limited war," Zarif said, echoing his previous comments that a military strike on Iran by the United States or Saudi Arabia would result in an “all-out war."

Zarif also said that the US made it clear he was not welcome at the United Nations General Assembly in New York City next week that he planned to attend, despite being approved for a visa waiver.

"Well not necessarily, because the United States is under obligation, being the host of the UN headquarters to issue visas to member states. So they made it very clear in a letter that they attached to my visa that I'm not eligible to get a visa, but they're doing it on a waiver basis. So they want me to know that I'm not supposed to be here," Zarif said.

Reports said Zarif had held a first ministerial meeting on Saturday with Yusuf bin Alawi, the foreign minister of Oman, a country in the Persian Gulf which acted as a mediator between Iran and the US during talks that led to the 2015 nuclear agreement between Iran and world powers.