TEHRAN (defapress) – Iranian President Hassan Rouhani, in a meeting with United Nations Secretary-General Antonio Guterres, deplored the US government’s “economic terrorism” against the Islamic Republic and the UN’s silence on this on other US crimes.
News ID: 78813 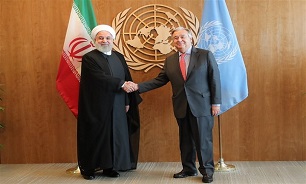 In the meeting, held on the sidelines of the 74th session of the UN General Assembly in New York on Wednesday, Rouhani criticized the UN’s silence and inaction over the US government’s sanctions and economic terrorism against the Iranian nation as well as the daily crimes of the Zionist regime in the Middle East.

“At any rate, the Iranian nation will overcome these problems like the previous ones but it will remain a disgrace to history that an aggressive government has committed so many crimes through resorting to economic terrorism against all people of a nation and that the UN has kept silent,” Rouhani said.

He further referred to the fragile situation in the region and said, “Today Palestine is in a difficult situation and the Zionist regime is attacking Palestine, Syria, Lebanon and Iraq on a daily basis and the UN is silent on these crimes.”

“However, this trend has to change and this important international organization should fulfill its duties,” Rouhani added.

Guterres, for his part, said that the UN fully supports the 2015 Iran nuclear deal, known as the Joint Comprehensive Plan of Action (JCPOA), adding that the deal is more than just an agreement because it is part of a UN Security Council resolution.

The remarks came against the backdrop of increased tensions between Iran and the US with Washington imposing new economic sanctions against the Islamic Republic.

The US has ratcheted up pressure on Iran since last year after withdrawing from the JCPOA.

The tensions escalated after Yemeni armed forces conducted a large-scale operation against Saudi Arabia’s Aramco oil installations on September 14, in response to the Saudi-led war on their country.