TEHRAN (defapress) – German Ambassador to Iran Michael Klor-Berchtold has asked where he could visit in Iran on the occasion of World Tourism Day, but Iranian netizens went to surprise him.
News ID: 78833 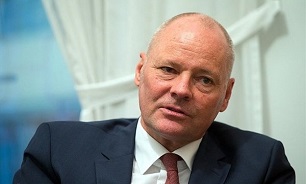 “Today is #WorldTourismDay. What insider tips do you have for a foreign Ambassador living in #Iran?” he asked on Friday in his Twitter account, while also posting several photos of some tourists destinations in Iran.

He probably expected to see recommendations on best tourist resorts in the country but netizens largely invited him to pay a visit to areas in Iran which were hit by German-made chemical bombs of Saddam’s regime back in Iran-Iraq war.

“Oh, a lovely destination would be house of an Iranian war veteran and a victim of German chemical agents who is still gasping for air when he's walking. You remember selling chemical weapons to Saddam around 1980s...?” wrote a netizen.

“Although you are a cool ambassador and we like you, pay a short visit to those cities and villages which were attacked by German chemical bombs,” wrote another user.

One other user answered that the envoy should visit “Sardasht and Shalamcheh and other villages chemically attacked by Saddam and also the victims. By the way, Mr ambassador, do you know which European country sold Saddam mustard gas?”

Also a group of users invited Klor-Berchtold to make a visit to cancer hospitals in Tehran where patients have a hard time finding their required medicine due to sanctions.

Saddam, sappointed from winning the war against Iran, launched several chemical attacks on Iranian cities, targeting civilians. Victims of such attacks are still suffering years later after the aggression.

One of the major attacks hit Sardasht, northwest of Iran, where it killed 100 civilians, injuring 8000 others and leaving some of them permanently disabled. Overall, Iraq is known to have launched over 350 large-scale gas attacks along the Iran-Iraq border between 1980 and 1988 on combatants and non-combatants, leaving behind over 107,000 victims.

As many as 2,600 of that total died at the time, and over 45,000 others were left in permanent need of relief aid provided by Iran's Veterans and War Victims Foundation.

Germany, Italy, the UK, the US, the Netherlands and several other countries provided the Iraqi dictator with the equipment and material to build chemical weapons apparently because they didn’t want Iran to be the winner of the eight-year war.