Iran calls on intl. community to condemn, make up for US ‘economic terrorism’

TEHRAN (defapress) – Gholamhossein Dehghani, Iran’s deputy foreign minister for legal and international affairs, has called on the international community to strongly condemn the US ‘economic terrorism’ and compensate for the losses incurred on victim countries.
News ID: 78853 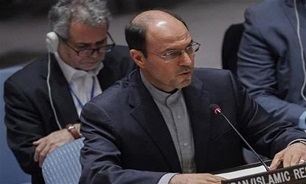 He was speaking at the 43rd annual ministerial meeting of G77 and China which was held Friday in New York on the sidelines of the 74th session of the UN General Assembly.

In his address, the Iranian diplomat censured the US’ destructive measures against multilateral foundations, calling on the Group of 77 and China to counter the unilateralism of the US and its allies through strengthening unity and cooperation among the Member States.

“The sanctions, more than and before anything else, are targeting the everyday lives of people,” he said.

He further called on the international community to “break its silence” and condemn the US’ economic terrorism in the strongest terms possible, and also to make up for the losses incurred on victim countries of US’ terrorist measures.

The Group of 77 (G77) and China at the United Nations is a coalition of 134 developing nations, designed to promote its members' collective economic interests and create an enhanced joint negotiating capacity in the UN.