TEHRAN (defapress)- Commander of the Iranian Army Major General Seyed Abdolrahim Mousavi stressed that his country's active and smart resistance has defused all US pressures and sanctions.
News ID: 78874 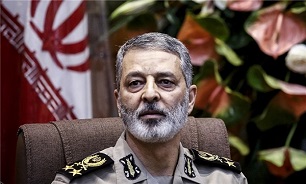 "The signs of failure of the (US) strategy of maximum pressure is fully clear," he added.

The US policy of maximizing pressure followed by false assumptions to collapse Iran's national economy was genuflected in the face of strategy of active resistance, Shamkhani said, in a meeting with a numbers of parliamentarians and presiding board of the “Faction against the Sanctions” of the parliament.

He pointed to the intense psychological war that was designed and implemented by the mainstream media to support the US maximum pressure policy against Iran.

The resilient Iranian people, despite the heavy economic pressures, because of their awareness, insight and insistence, and intelligence were not defeated in this war and disappointed the enemy in achieving its goals, the high-ranking official went on to say.

Shamkhani welcomed the initiative of the “Faction against the Sanctions” to create a club of sanctioned countries and active involvement in the fight against the US economic terrorism, pointing out that resistance will lead to success when it comes to a continuous approach and activity and it can be considered as an effective step in the path of continuing an active resistance strategy.

He referred to the issue of countering sanctions as one of the main pillars of unity among the various political factions in the country, and said that the enemy has realized, in the light of past experience, that the Islamic Republic in the face of threats has reached out to considerable maturity and potential and therefore is trying to minimize the focus of the nation's forces on countering the threats by creating social, political and security crises and problems.