No secure world with Isolated Iran

TEHRAN (defapress) – President Hassan Rouhani referred to the unanimity of the parties to the 2015 nuclear deal against the US’ decision on leaving the historic pact, saying that they should know that world security will not be materialized by isolating Iran.
News ID: 78880 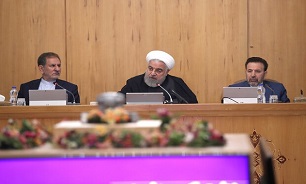 “The whole world has discovered that the US’ withdrawal from the JCPOA was wrong. They confess they need to talk with Iran,” Rouhani addressed the cabinet meeting on Wednesday.

“If they want a secure region, they must accept Iran’s regional power,” the president said, adding that “I’d better say that reaching a secure world would not be materialized with isolation of Iran.”

Elsewhere in his remarks, Rouhani pointed to France’s proposal of a $15 billion credit line for Iran, saying the US was the main reason behind the failure of the proposal.

“I sincerely thank the French President [Emanuel Macron] for his efforts on the sidelines of the [74th] session of the UN General Assembly. We had good cooperation in this line but it was the White House that prevented the materialization of the plan.”

US President Donald Trump withdrew his country from the JCPOA, which was signed by world powers, in May 2018, and has since reinstated old sanctions and imposed new ones on Tehran in the hope of crippling its economy and forcing it into falling in line.

Since then, Europe says it has strived to preserve the deal, setting up a financial mechanism called INSTEX to help Iran circumvent US sanctions. But in reality, not much has been achieved. Trade with Iran has not surged via INSTEX, and Europe has not stood up to the US over its illegal sanctions and unceremonious withdrawal from the historic deal. And yet Iran is the signatory being asked to cooperate.

Three separate steps have been taken so far by Iran and the fourth is scheduled for November. Tehran wants the US sanctions to be lifted, but as pressure on the Iranian people increases with inflation skyrocketing and vital goods and medicines becoming increasingly scarce, the government is losing patience.

Last month, France offered a credit line of $15 billion, expected to guarantee the sale of Iran's crude oil, as an incentive to bring back Iran to the JCPOA. However, the offer has not been finalized.

Rouhani added, “The anti-Iranian lobby had set a plot to tell the people around the world that Iran has begun a tension in the critical Persian Gulf region.”

“What we felt during our short stay in New York was that the negative atmosphere against Iran was destroyed; especially because of the fact that we advocated peace and proposed Hormuz Peace Endeavour (HOPE) initiative,” said the President.

He added, “They wanted to convince the public opinions that everything is ready for a peaceful diplomacy and it is Iran that is being stubborn.”

“In my 70-hour visit to New York, we had 15 meetings with world leaders, and we could shatter the conspiracy that the enemies had planned against Iran,” he said.