TEHRAN (defapress)- Iranian Foreign Minister Mohammad Javad Zarif underlined the need for all Afghan groups to participate in peace talks, calling on foreign sides to allow Afghanistan to decide for itself.
News ID: 78917 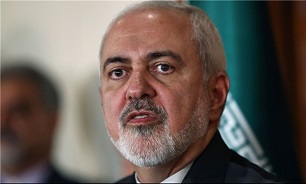 We pursue peace talks in Afghanistan with all sides, but we do not accept a peace that the foreigners favor in Afghanistan and did not participate in it (peace talks)," Zarif said, addressing the parliamentarians in Tehran on Sunday.

"All Afghans should be present in Afghanistan and the peace process, and the foreign powers should not exclude one or several groups in peace talks by exerting their influence in pursuit of specific objectives," he added.

In relevant remarks in August, Iranian Parliament Speaker Ali Larijani, at a joint press conference with his Afghan counterpart in Tehran, said that the US is not genuinely after establishing peace in Afghanistan, adding that Washington is after obstructing foreign investments in the war-torn country.

"The security of Afghanistan is important for the Islamic Republic of Iran but some countries are after creating insecurity in Afghanistan with terrorist measures, and their final objective is to undermine economic investments in this country," Larijani said, during the joint press conference with his Afghan counterpart Fazl Hadi Moslem Yar in Tehran.

"The Americans have held countless rounds of negotiations with Taliban while this is not the right path and all measures must be undertaken with the central role of the Afghan government," he said, criticizing the US-Taliban talks for trying to push the Afghan government aside.

He then cautioned that the current situation in Afghanistan is sensitive, highlighting that the White House is "acting insincerely" in its relations with Afghanistan.

"While they claim to be after negotiations, they are following a different path," the top lawmaker stressed.

"Your presence in Tehran will assuredly have more growth in political and economic relations between Iran and Afghanistan," Larijain told Moslem Yar.

For his part, Moslem Yar said that Afghanistan strongly condemns the US unilateral sanctions against Iran which has been supportive of Afghanistan in all these years.

"The Americans are not after genuine peace in Afghanistan and they are the common enemies of Iran, Afghanistan, Islam and the human kind" the Afghan speaker asserted, referring to the suspicious growth in the presence of ISIL terrorists in the war-torn country.