TEHRAN (defapress) – A local official in Iran’s western province of Ilam said the number of Iranian pilgrims returning home from Iraq after attending the Arbaeen procession has begun to exceed the number of travelers leaving for the Arab country.
News ID: 78927 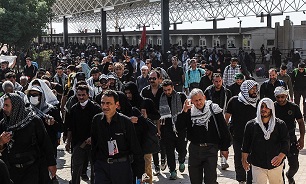 Speaking to Tasnim on Tuesday morning, head of a headquarters handling the Arbaeen travels in Ilam said around 170,000 people have crossed the border from Mehran border crossing since Monday evening.

Ahmad Karami said while 80,000 travelers have left the country for Iraq, more than 90,000 pilgrims have returned to Iran.

A reverse trend in the Arbaeen travels has begun, meaning that more people are coming back from Iraq after attending the religious ceremonies, he added.

Arbaeen, which is one of the largest religious gatherings in the world, comes 40 days after Ashura, the martyrdom anniversary of Imam Hussein (AS).

Each year, a huge crowd of people flock to Karbala, where the holy shrine of Imam Hussein is located, to perform mourning rites.

More than 3 million Iranians have travelled to Iraq for this year’s Arbaeen.