US imposes new sanctions on Turkey over Syria offensive

TEHRAN (defapress) – The US has imposed new sanctions against Turkish officials and institutions over the country's incursion into northern Syria, Treasury Secretary Steve Mnuchin and VP Mike Pence announced on Monday.
News ID: 78950 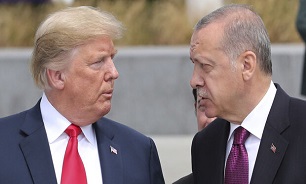 Specifically, Mnuchin said the US has sanctioned three Turkish ministers along with their department of defense and ministry of energy, according to CBS News.

Pence said Trump signed an executive order authorizing the sanctions and directed him to lead a delegation to Turkey to begin negotiating a resolution between the Turks and Kurds. The president also ordered a hike on steel tariffs and immediately canceled negotiations over a $100 billion trade deal with Turkey, according to the report.

The executive order authorizes the treasury secretary to sanction Turkish officials for "actions or policies that further threaten the peace, security, stability, or territorial integrity of Syria." In an earlier statement, the president said he was "fully prepared to swiftly destroy Turkey's economy if Turkish leaders continue down this dangerous and destructive path."

Turkey on Wednesday began pounding positions of the Syrian Democratic Forces (SDF) with jets and artillery and sent in troops to purge them from the area east of Euphrates.

The offensive came three days after Trump in a sudden change of policy that was widely condemned by both Republicans and Democrats, told his counterpart Erdogan that he would pull US troops from the region, effectively exposing the Kurdish militants to their archenemy, Turkey.