Iran should not be sole party for implementing JCPOA: UN envoy 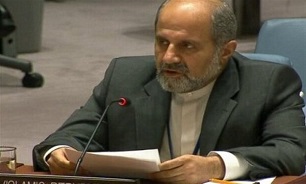 With its destructive measures, the United States has jeopardized global peace with continuation of modernizing its weapons and increasing weapons stockpiles and arsenals, Al Habib added.

He went on to say that Islamic Republic of Iran is the major victim of systematic attacks of chemical weapons in contemporary history.

The US pullout from the JCPOA is a solid evidence that not only Washington has failed to live up to its commitments, but also it threatens other countries to do so," Al Habib added.

He further censured the US' economic terrorism against Iran, saying, “the US is after exerting maximum pressure on Iran and it should be stated that Iran cannot and should not be only party implementing its JCPOA commitments.”