TEHRAN (defapress) – The foreign ministers of Iran and Turkey held talks about the latest situation in the northern parts of Syria, where Turkey has agreed to suspend its offensive for five days after a military operation that sources say has displaced 300,000 people.
News ID: 79028 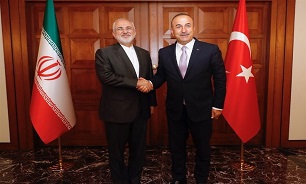 In the call, the two top diplomats discussed the latest regional developments, particularly the situation in northern Syria.

After eight days of the Turkish military operation against Kurdish-controlled areas of northeastern Syria, about 300,000 people have been displaced from their homes and at least 71 people killed, according to the UN and a human rights monitor.

Turkey launched the cross-border operation on October 9 after repeatedly threatening to clear the border area of the Kurdish People's Protection Units (YPG) fighters, which it considers a "terrorist" group.

On Thursday, Turkey and the US agreed to a temporary ceasefire in the offensive to allow Kurdish fighters withdraw from a planned so-called "safe zone".

Ankara says the campaign, dubbed Operation Peace Spring, would allow the repatriation of some of the 3.6 million Syrian refugees Turkey hosts on its soil.