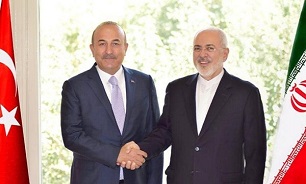 The phone talks were held late on Friday Zarif and Cavusoglu discussed the latest regional developments, particularly Northern Syria in a telephone conversation late on Friday.

Meanwhile, Zarif dealt with the latest regional developments and war in Northern Syria in separate telephone talks with the Russian, Iraqi and Syrian foreign ministers late on Thursday.

According to Iran Ministry of Foreign Affairs Media Head Office, the talks with the officials of the other countries will continue.

During the phone conversation with his Syrian counterpart Walid al-Muallem on Thursday, Zarif underlined the need for an end to Turkey’s incursion into Syria and also looking for a political solution to the problems between Ankara government and the Kurds.

During the telephone conversation, the two sides exchanged views on the latest developments in Northeastern Syria.

Zarif and Lavrov underlined the need to achieve a durable and long-term stability in the Eastern bank of the Euphrates River on the basis of respect for the sovereignty and territorial integrity of the Syria.