TEHRAN (defapress)- Senior Iranian and Russian officials in a meeting in Moscow discussed the latest developments in the region, specially the Persian Gulf.
News ID: 79057 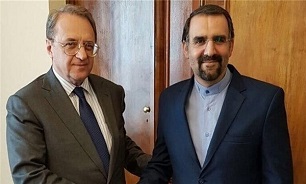 Iranian Ambassador to Russia Mehdi Sanayee met and talked with Russian presidential envoy for the Middle East and Africa and Deputy Foreign Minister Mikhail Bogdanov in Moscow on Monday.

The two sides conferred on issues related to the Persian Gulf region and Syria.

On July 30, Russia's concept of collective security in the Persian Gulf was distributed as an official document approved by the United Nations.

"In the current conditions, energetic and effective action is needed at an international and regional level in the interests of improving and further stabilizing the situation in the Persian Gulf, overcoming the prolonged crisis stage and turning this sub-region to peace, good neighborly relations and sustainable development," the document said.

The document added that practical work on launching the process of creating a security system in the Persian Gulf may be started by holding bilateral and multilateral consultations between interested parties, including countries both within the region and outside of it, UN Security Council, LAS (League of Arab States), OIC (Organization of Islamic Cooperation), PGCC (Persian Gulf Cooperation Council).

Iranian Foreign Minister Mohammad Javad Zarif also recently outlined the initiative, at the UN Security Council meeting, chaired by Sergei Lavrov in New York, and stressed the need for regional cooperation for peace and stability in the Persian Gulf, calling for the countries of the region to join.

In a meeting themed ‘United Nations Cooperation With Regional Organizations’ that was held at the UN Security Council, the Iranian foreign minister said that President Hassan Rouhani, in his speech, called for the Hormuz Peace (HOPE) initiative and invited all countries in the region to participate in the initiative.

He emphasized the importance of the proposal put forward by the Russian Federation on the security mechanism in the Persian Gulf, adding that “I must explain that the HOPE initiative is based on the fact that all countries in the region have a duty to guarantee peace, stability, and prosperity in the region. Together with the international community, they share a common interest in maintaining freedom of shipping and energy transfer.