Nasrallah warns against foreign conspiracies in Lebanon through exploiting protests

TEHRAN (defapress) – Secretary-General of Lebanese Hezbollah Hassan Nasrallah has once again warned against the prospects of political attacks against Lebanon by international and regional powers.
News ID: 79086 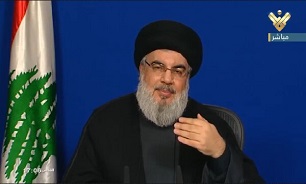 Speaking on Friday, Hezbollah leader said that the Resistance movement will not accept the resignation of the Lebanese government as a solution to end the recent popular protests in the country.

He said that Hezbollah ways ready to discuss ways to end the political sectarianism in Lebanon. Meanwhile, he said that social livelihood demands have been diverted to target the Resistance movement.

He called certain individuals and groups who are behind the protest as corrupt people who are pursuing conspiracies from some regional and international powers.

Certain embassies and suspicious sides are funding protests to achieve their own objectives, he noted, warning the protests to know who these sides are, their objectives, what sorts of foreign agendas they are pursuing.

Some corrupt elements have infiltrated in popular movement in Lebanon, according to Hezbollah chief.

Meanwhile, the Hezbollah leader described the protest as spontaneous that raise legitimate demands, while warning that certain sides are seeking to exploit the popular protest to settle accounts with Hezbollah.

During the first few days, the people who were hungry were participating in the popular protests but the case is no longer true anymore as some regional elements are exploiting popular movement to implement foreign agendas, according to the secretary-general of Hezbollah.

Nasrallah stated that some Lebanese sides whished that the United States would attack Iran in order to change the regional equations but the reality is that the US is leaving the region.

He further underscored that the US will never enter a war with Iran.