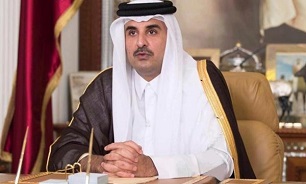 "The Qatari Emir has issued a strict order to develop bilateral ties with the Islamic Republic of Iran in all fields," al-Thani said in a meeting with Iranian Communication and IT Minister Mohammad Javad Azeri Jahromi in Doha on Wednesday.

He also underscored Qatar's interest in the expansion of relations with Iran in the technological and innovation fields.

Azari Jahromi, for his part, said that the Iranian companies are ready to cooperate with Qatar to hold the 2022 FIFA World Cup event which was welcomed by al-Thani.

Saudi Arabia and its allies, including the UAE, Bahrain and Egypt severed ties with Qatar in early June 2017 over charges that it supports terrorism. They have accordingly imposed a land, sea and air blockade against Qatar thus leaving only a sea and air corridor open with Iran.

This created a rise in Iran’s exports – particularly fruits and vegetables – to Qatar. Iran has also become a corridor for exports of other countries to the blockaded Persian Gulf state.

It noted that the amount of Iran’s exports to Qatar during that period of time compared to the same period last year had been increased by 64 percent and 435 percent in terms of weight and value, respectively.