TEHRAN (defapress) – Iran’s Foreign Minister Mohammad Javad Zarif said the first meeting of Syria's constitutional committee in Geneva has paved the way for a "path to the rule of law" in the Arab country after years of war.
News ID: 79142 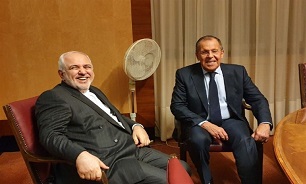 “Returned from Geneva where I met with Russian & Turkish FMs, & UN's #GeirOPedersen, on eve of inauguration of Syria Constitutional Committee. After years of devastating war, path to rule of law begins— thanks to #Astana process. Difficult road ahead, but no other alternative,” Zarif tweeted late on Wednesday.

A total of 150 delegates representing the government, opposition and civil society on Wednesday met at a Constitutional Committee meeting held inside the Council Chamber of the United Nations office in Geneva, Switzerland.

The members of the Constitutional Committee, which took almost two years of consultations to be formed, are tasked with reforming the Arab country's constitution before it is put to the vote of the Syrian people.

The UN hopes this will be a chance to begin formulating tangible agreements between the rival sides, but Russia and Iran have warned this is just the beginning of a long and difficult process.

In a joint statement released at the end of a separate meeting with UN Special Envoy to Syria Geir Pedersen on Tuesday, Iran, Russia and Turkey stressed that Syria’s long-awaited Constitutional Committee must work independently and far from any foreign interference in order to draw maximum support from all walks of the Syrian nation.