TEHRAN (defapress)- Syrian sources reported continued attacks by the Turkish army and affiliated militants and occupation of several regions in Northern Hasaka despite the security agreement with Russia over Syrian-Turkish borders.
News ID: 79144 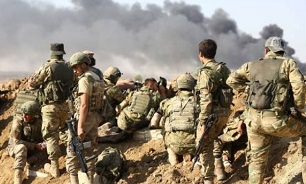 Meanwhile, the Turkish army and affiliated terrorists targeted with artillery shells houses in the villages of Tal Tamr's Northern countryside, causing the displacement of a large number of people.

Also, a convoy of the US military trucks moved from Qasrak base between Tal Tamr and Tal Baidar in Hasaka's Northern countryside, heading for Iraq.

Meantime, the London-based Syrian Observatory for Human Rights reported heavy clashes between the Turkish army and the Syrian Democratic Forces (SDF) and the Syrian army in the village of Arisheh and other regions of Abu Rasin, adding that over 400 families have fled to Tal Tamar from Arisheh and the nearby towns.

Also, the Arabic-language al-Watan newspaper confirmed the Turkish army's continued attacks and occupation of regions in Northeastern Syria, describing it as a gross violation of the recent agreement between Russia and Turkey over the establishment of full security at the Turkish-Syrian borders after a Kurdish pullback.

In a relevant development on Monday, clashes erupted between the Syrian Army units deployed in Ras al-Ein and Turkish occupation forces, which attacked the area during army’s deployment.

Ras al-Ein is located in Northwestern Hasaka province and 85 kilometers from the city of Hasaka and near the borders with Turkey.

On Saturday, the Syrian Army had deployed in Western regions of the city of Qameshli in Hasaka province and they were warmly welcomed by the residents of these regions.