TEHRAN (defapress)- Speaker Nancy Pelosi (D-Calif.) stated on Friday it's possible that controversies beyond Ukraine could be part of the impeachment case against President Donald Trump.
News ID: 79164 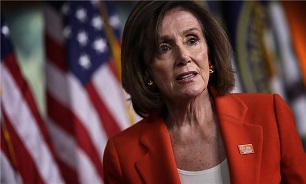 House Democrats have recently sought to narrow their impeachment inquiry to the allegations stemming from an intelligence community whistleblower complaint that said Trump tried to pressure Ukraine to initiate politically charged investigations in return for the release of congressionally approved security aid, The Hill reported

Trump's dealings with Ukraine have united nearly all House Democrats around their impeachment probe, though many had previously pushed for impeachment over the president's efforts to undermine former Special Counsel Robert Mueller's investigation into Russia's election interference.

Pelosi on Friday emphasized that the decision on articles of impeachment will be up to the committees handling the inquiry. She did not rule out the possibility that the obstruction of justice allegations against Trump in Mueller's report could come up.

"What we're talking about now is taking us into a whole other class of objection to what the president has done. And there may be other — there were 11 obstruction of justice provisions in the Mueller report. Perhaps some of them will be part of this," Pelosi noted during an interview with Bloomberg Television.

"But again, that will be part of the inquiry, to see where we go," she added.

Mueller's report did not conclude whether Trump obstructed justice, but laid out 10 instances in which he may have done so, including firing James Comey as FBI director, pressuring then-Attorney General Jeff Sessions not to recuse himself from the Russia investigation and attempting to remove Mueller as special counsel.

For now, though, Democrats leading the impeachment inquiry are focused on uncovering Trump's dealings with Ukraine and whether he instituted a quid pro quo for US military aid.

Pelosi also told Bloomberg News in a roundtable with editors and reporters on Friday that she expects public hearings will begin this month after several weeks of closed-door depositions with current and former Trump administration officials.

The resolution adopted by the House on Thursday sets up the process for open hearings by the House Intelligence and Judiciary committees and for releasing witness transcripts. It also lays out the steps for the Intelligence panel to issue a report on its findings.

Open hearings would begin in the House Intelligence Committee. If Democrats decide to write articles of impeachment, the House Judiciary Committee would then take the lead.

Democrats have been aiming to wrap up the impeachment inquiry by year's end, or at least before the first presidential primary ballots are cast at the Iowa caucuses on February 3.

"We haven't even made a decision to impeach. This is what an inquiry is about," Pelosi underscored.