TEHRAN (defapress)- Leader of Asa'ib Ahl al-Haq Resistance Movement Qais Khazali said that Israel and the UAE are playing an even bigger role than the US and Saudi Arabia in exacerbating unrests and clashes in Iraq.
News ID: 79204 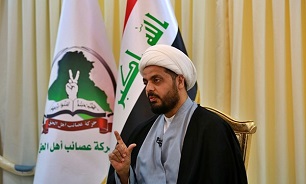 He also revealed that the Israeli spy agency, Mossad, is operating in several provinces in Northern Iraq and even Sulaimaniyeh city, adding that the CIA and Mossad are also running a joint base at Baghdad airport.

"Mossad is attempting to use some defectors of certain Iraqi parties to increase clashes and the Ba'athis are also one of the main pivots to provoke unrests in Iraq, Khazali said.

A senior Iranian political analyst last week also warned that the recent violent unrests in Iraq and Lebanon were being misused by certain foreign states to turn the people's peaceful protests for restoring their legal rights into a ground to attain their ominous goals.

"The main purpose of protests in Iraq, Lebanon, Tunisia, Algeria and even Sudan was protesting at the financial and administrative corruption," Seyed Hadi Seyed Afqahi told FNA.

He added that the protest rallies in the regional states have two dimensions; one is the protests of average citizens and ordinary people and unions for their living difficulties and expenses; on the other side of the protests the foreign hands can be seen and they want to misuse the rallies of people to their own benefit.

"Unfortunately, we see this ugly phenomenon in Lebanon and Iraq too. People in Lebanon have held peaceful protests and the government has heard the people's voice but a series of norm-breaking images were displayed and slogans were shouted in the protests that turned them into political rallies," Seyed Afqahi said.

In Iraq, Grand Ayatollah Seyed Ali Sistani warned against the infiltration of agents with malevolent intentions into public protests in the Arab country, calling upon demonstrators and security forces to keep anti-occupation rallies peaceful.

“Don’t let those with vicious intentions to infiltrate among you and attack security forces,” the official representative of Ayatollah Sistani in Iraq Abdul Mahdi al-Karbalai said last week, conveying a message of the senior cleric.

The protests that started early in October subsided after the public get engaged in holding the annual massive march of Arbaeen, but restored after religious rituals of the second month of the Islamic calendar were over.