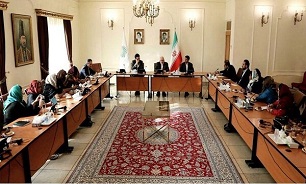 According to a statement by the Foreign Ministry Spokesman Abbas Mousavi, the meeting took place on Sunday afternoon in Tehran.

At the meeting, according to the spokesman, Indian women raised questions on a variety of issues, including Iran-India relations, US economic terrorism against the Iranian nation, US unilateralism, social and economic conditions in Iran, especially the status of Iranian women.