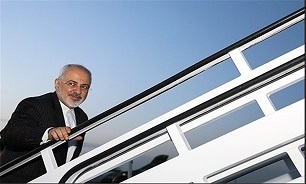 Heading a high-ranking delegation, Zarif left Tehran for Astana on Monday at the official initiation of the Central Asian country’s officials.

The Iranian top diplomat plans to attend the annual meeting of the Astana Club and hold talks with senior officials of Kazakhstan during the visit.

The Astana Club is a global issues dialogue platform based on Chatham House rules and convened by Nursultan Nazarbayev.

Club participants include scholars, businesspersons and former members of the US Congress.