Iran not to bear all JCPOA burden

TEHRAN (defapress) – Iran’s Deputy Permanent Representative to the United Nations Es'hagh Al Habib warned on Monday that Tehran will not take on all the responsibilities of the 2015 nuclear deal, urging all parties to the pact to live up to their responsibilities.
News ID: 79258 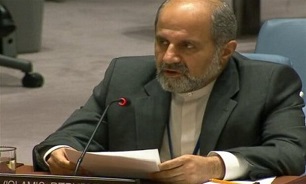 Stressing that it is not possible for Iran to undertake all the obligations of the deal, formally known as the Joint Comprehensive Plan of Action, the Iranian envoy noted that no agreement can stay alive if parties to the deal fail to respect their commitments.

He made the comments while addressing the 74th United Nations General Assembly (UNGA) in New York.

The envoy once again voiced Iran's protest against the US' withdrawal from the JCPOA, saying it has been an irresponsible act.

Al Habib added that the International Atomic Energy Agency (IAEA) has verified Iran’s peaceful nuclear program through most rigorous inspection regime and there is no excuse for other parties to evade their commitments under the deal.

Stressing that Iran has so far remained committed to the nuclear agreement, the envoy underlined the necessity for IAEA to maintain its impartiality in creating its future reports over the issue.