TEHRAN(defapress) - The Pentagon raised concerns over the US government’s hold-up of military aid to Ukraine, which a national security official saw as “essential”, according to a congressional hearing transcript released on Monday.
News ID: 79261 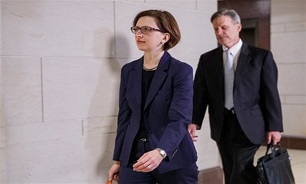 The testimony of Laura Cooper, deputy assistant secretary of defense, released following a previous closed-door session, is the latest piece in the jigsaw of the impeachment inquiry against Donald Trump, which begins televised hearings on Wednesday.

Cooper’s testimony on 23 October was delayed by a few hours when a group of Republican members barged into the secure facility on Capitol Hill to stage a protest.

She said the White House Office of Management and Budget directed the freeze on hundreds of millions of dollars of military aid for Ukraine against the judgment of career officials at both the defense and state departments.

“All of the senior leaders of the US national security departments and agencies were all unified in their – in their view that this assistance was essential,” Cooper said, The Guardian reported.

She also raised concerns to senior government officials about the legality of withholding the money, which had been authorized by Congress.

Adam Schiff, chairman of the House intelligence committee, tweeted: “Laura Cooper’s testimony reveals how Trump froze Congressionally-approved aid to Ukraine. Cooper raised concerns about this hold, as did others.”

Cooper described the puzzlement at the Pentagon over the hold-up of military aid and how it queried the decision on 18 July. She told the hearing: “We called around to NSC [national Security Council], to state [department]. Those are our usual colleagues.”

Yet a satisfactory answer was not forthcoming. Other diplomats have testified that the Trump administration attempted to tie military aid to Ukraine to an investigation of a potential Democratic rival for the presidency in 2020, Joe Biden.

Cooper also told how Kurt Volker, then special envoy to Ukraine, implied the aid freeze might be resolved if the Ukrainians issued a statement to “disavow any interference in US elections” and “commit to the prosecution of any individuals involved in election interference”.

Cooper was asked if Volker believed that such a gesture would “lift this issue” of the $391m in military assistance. She replied: “Yes.”

Cooper’s transcript adds to a growing body of evidence. Schiff has released transcripts from hundreds of pages of testimony received behind closed doors.

Trump sought to question their veracity. He tweeted on Monday night: “Just like Schiff fabricated my phone call, he will fabricate the transcripts that he is making and releasing!”

Trump did not cite evidence for the extraordinary claim and none of the diplomats quoted in the transcripts, or their lawyers, have complained about their accuracy. Nor has Schiff fabricated a phone call.

Robert Luskin, who represents the witness Gordon Sondland, US ambassador to the EU, said in an email to the Daily Beast: “No reason to believe that the transcript was altered.”

Conversely, Trump has repeatedly asserted that he released a full version of his “perfect” 25 July call with Ukraine’s president, Volodymyr Zelenskiy, repeatedly telling critics to “Read the Transcript!”

In fact it was an edited version with some potentially crucial passages missing.

The inquiry will reach a pivotal moment on Wednesday with appearances by Bill Taylor, the top US diplomat in Ukraine who told the House committees in closed-door sessions about his misgivings that US aid was being frozen, and George Kent, a senior state department official who expressed concern about Trump’s lawyer Rudy Giuliani operating an irregular diplomatic channel.

On Friday, the intelligence committee will hear from former US ambassador to Ukraine Marie Yovanovitch, who said in the private hearings she was removed after Giuliani waged a campaign against her with “unfounded and false claims by people with clearly questionable motives”.

House Republicans released a list on Saturday of witnesses they would like brought before the committee, including Joe Biden’s son Hunter, who had business interests in Ukraine, and the anonymous whistleblower who brought a complaint against Trump over the Zelenskiy phone call. Neither is likely to be summoned.

There will be inevitable parallels with the Watergate hearings in 1973, which over seven months transfixed the nation and precipitated the resignation of Republican Richard Nixon, and the 1998-99 impeachment of Democrat Bill Clinton, which was followed by his Senate acquittal.

Although some Republicans have struggled to defend Trump’s conduct, many of his dubious claims will probably be amplified by Republicans.

John Farrell, a biographer of Nixon, told the Guardian: “You hope that people will try to pull themselves away from the snark and the terribly leading questions when the cameras are on but they may choose to grandstand for their base. Republicans, in particular, could decide that they just want to make the whole thing look like a circus, to tarnish it in the public eye.”

All concerned will be operating in a very different media environment that includes rightwing cable network Fox News and partisan echo chambers online.

Many political commentators believe Trump’s impeachment is all but certain in the Democratic-controlled House, although he is almost certain to be acquitted by the Republican-controlled Senate.