Iranians Held Rallies in Support of Establishment after Friday Prayers 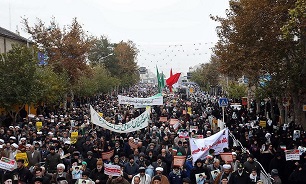 Following a hike in the price of gasoline on November 15, a number of Iranian cities saw sporadic protests that turned violent in some cases. A number of banks and government buildings were set ablaze.