Instead of Defending Thugs, EU Should Meet Commitments to Iran: Spokesman

TEHRAN (defapress) – Iranian Foreign Ministry Spokesman Seyed Abbas Mousavi condemned recent moves by some European Union officials to interfere in the internal affairs of the Islamic Republic and said instead of defending the “thugs”, the EU should meet its commitments to the Iranian nation.
News ID: 79318 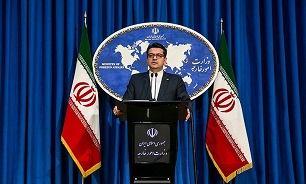 In remarks on Thursday, Mousavi deplored recent remarks by Maja Kocijancic, EU’s spokesperson for foreign affairs and security policy, as interference in the internal affairs of Iran and said the European countries had better deal with their own internal problems first, which are leading to widespread arrests and growing discontent across Europe.

“What should be addressed first and foremost regarding Iran is that Europe should be held accountable for not honoring its commitments under the Joint Comprehensive Plan of Action (JCPOA) and for backing the US sanctions and economic terrorism against the Iranian nation…,” said Mousavi.

Instead of making meddlesome remarks and defending “the thugs and vandalists” in Iran, the EU should meet its JCPOA commitments, he noted.

The remarks came as Kocijancic expressed concern over recent riots in Iran. "We expect Iran's security forces to exercise maximum restraint in handling the protests and for protesters to demonstrate peacefully. Any violence is unacceptable," she said.

Following a hike in the price of gasoline last Thursday, a number of Iranian cities saw sporadic protests that turned violent in some cases. A number of banks and government buildings were set ablaze.

In an address on Sunday morning, Leader of the Islamic Revolution Ayatollah Seyed Ali Khamenei warned that the sporadic protests and acts of vandalism in Iran would create insecurity.

Describing insecurity as the worst calamity for society, the Leader said that “all evil centers in the world” have mobilized efforts in recent days to encourage unrest in Iran.