US interfering in formation of Lebanese government: Hezbollah

TEHRAN (defapress) – Hezbollah Deputy Secretary-General Sheikh Naim Qassem said that Washington is the main obstacle in the formation of a new government in Lebanon.
News ID: 79347 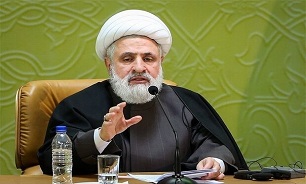 He noted that US officials had been in direct contact with Lebanese politicians and officials, adding, “let them leave us alone so we can reach an understanding among ourselves. The more they intervene the more they delay the solution.”

The country would not be rid of its ongoing economic and political woes unless foreign vested interests stopped tugging away at it, Qassem said.

Prime Minister Sa’ad Hariri resigned in late October amid nationwide protests against corruption and economic adversity that had begun earlier that month.

On Tuesday, protesters blocked roads leading to the parliament in the capital Beirut, forcing the legislature to postpone what was supposed to be its first session in two months, according to PressTV. Heavy clashes were reported later that day between security forces and a group of protesters attempting to make their way into the parliament.

While expressing hope that he did not “see signs of a civil war in Lebanon,” Qassem cautioned, “We have information of American attempts to create some security problems.”

He, however, assured, “Hezbollah is determined not to fall into strife that America wants.”

The Hezbollah official declared, “We support the people 100% in putting the corrupt on trial.”

“The corrupt must stand trial in Lebanon regardless of who they are ... we support all measures that limit corruption and that recover looted wealth,” he said.

Asked why Hezbollah and its allies had not opted to form a cabinet on their own, Qassem said the group preferred the prime minister be chosen through agreement with the main parties.

“There are continuous contacts between Hezbollah and Prime Minister Hariri to pick the prime minister,” he announced.

Qassem said the first step towards dealing with the turmoil would be the formation of a government, which should start by implementing an emergency economic plan after amending it if necessary.