TEHRAN (defapress) – Thousands of Venetians took to the streets of the Renaissance city on Sunday to vent anger over frequent flooding and the impact of giant cruise ships.
News ID: 79373 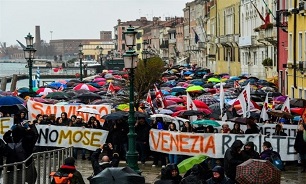 Braving heavy rain, between 2,000 and 3,000 people answered the call of environmental groups and a collective opposed to the boats.

Critics say the waves cruise ships create are eroding the foundations of the lagoon city.

Chanting slogans such as "Venice resist" and calling for Mayor Luigi Brugnaro's resignation, the marchers also appealed for a massive project, MOSE, to be mothballed.

The multi-billion euro infrastructure project has been under way since 2003 to protect the city from flooding, but it has been plagued by cost overruns, corruption scandals and delays.

"Venetians have just endured a deep wound. The flooding... brought this city to its knees and revealed its extreme fragility to the world," activist Enrico Palazzi told AFP.

The UNESCO World Heritage city is home to some 50,000 people, while some 36 million people visit it each year.