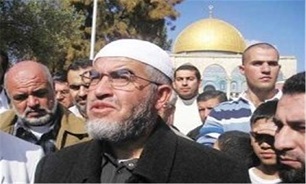 The trial, which continued for one and a half hours, was attended by hundreds of Palestinians who came in buses from different cities and villages across Israel to stand in solidarity with Salah, the Middle East Eye reported.

More than 1.8 million Palestinians still live in the territories occupied by Israel. They have resisted mass expulsion since the Israeli regime's creation in 1948.

"I have never witnessed in my career history such a racist decision," Salah’s lawyer, Khaled Zabarqa, said. "This is a political decision to silence the Palestinian leadership and prevent it from taking any actions in response to Israeli violations.

"The Israeli establishment, which is represented by political and security leaders, has hindered the possibility of a fair trial," he added.

Salah, from the town of Umm al-Fahm, southeast of Haifa, was detained in August 2017 and served 11 months in prison before he was moved to house arrest under tight restrictions. He was accused on 12 charges, including "inciting terror".

According to his lawyer, Salah is "banned from accessing tools of communication, including telephones, the internet and social media sites, speaking to the press and he must wear an electronic tag. Only his first- and second-degree relatives can visit him."

"It has been proven that the legal procedures were politicized and thus are being badly exploited… in order to politically prosecute Sheikh Raed," he said.

Inside the court hall and outside Haifa's court, a large crowd of Palestinian activists and political leaders, including members of the Joint Arab List, gathered to stand in solidarity with Salah, and to call for the protection of Al-Aqsa Mosque.

"We came at around eight in the morning to attend the court session, but the (Israeli) intelligence and police had already prepared themselves days earlier to prevent us from entering the court," Abu Ali Shawahneh, an old Palestinian man from Galilee, said.

Salah is one of the most recognized and influential figures among the Palestinians.

He is known as Sheikh al-Aqsa for his long years of activism to protect the third holiest site for Muslims.