TEHRAN (defapress) – The joint drills of the Chinese, Russian and South African Navy demonstrate the countries’ willingness to cooperate to ensure stability, Spokesperson for the Chinese Ministry of National Defense Senior Colonel Ren Guoqiang said during a briefing on Thursday.
News ID: 79408 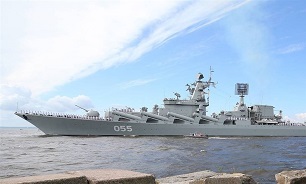 "These navy drills are the first event of this kind for the countries’ naval forces. These drills are of very high importance, as they facilitate the expansion of cooperation and partnership, play a key role in raising the military potential and demonstrate the willingness of the states to support peace and stability at sea and in the region," the spokesperson informed.

He added that the main aim of the joint maneuvers is to work on the skills related to "ensuring navigation security and improving threat response", Tass reported.

The joint drills of the Russian, Chinese and South African navies run in the territorial waters of South Africa from November 24 to November 30. Russia is represented by a naval group headed by the missile cruiser Marshal Ustinov. The group also includes the medium sea tanker Vyazma and the SB-406 rescue tugboat. South Africa’s SAS Amatola frigate and SAS Drakensberg replenishment tanker and China’s Weifang guided-missile frigate are taking part in the drills. The exercise is code-named "Mosi," which means "smoke" in one of South Africa’s state languages, Sesotho.

The Cape of Good Hope and the nearby city of Cape Town are located in a key part of the world where two oceans meet — the Atlantic Ocean and the Indian Ocean. The most important naval and trade routes from Europe, Africa and Asia pass through the area.

The current drill of the three countries is of the highest priority for its participants. Earlier, there were plans to carry out naval drills between South Africa and France and then Germany in the Cape of Good Hope area. However, they were rescheduled for next year, and the schedule for both drills has not been coordinated yet.