Rouhani in the Parliament to submit next year’s budget bill

TEHRAN (defapress) – The open session of the Parliament began with Iranian President Hassan Rouhani in attendance who has come to submit next year’s budget bill of the country.
News ID: 79516 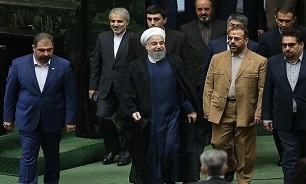 He will address the lawmakers and explain aspects of this bill before officially handing it over to the Parliament Speaker.

Nobakht said in early October that “we can say next year's budget does not rely on oil revenues and we will not spend even one Rial of oil income on the current operating budget neither on the expenditures. Oil revenues will only be consumed on purchasing capital assets and funding development projects.”