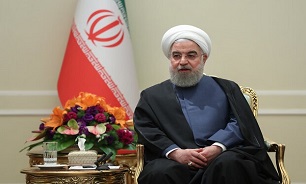 He made the remarks in Tehran on Tuesday morning before departure to the Malaysian capital city of Kuala Lumpur to participate in a summit to be attended by leaders from Islamic countries.

Rouhani said the Kuala Lumpur Summit is a good opportunity for world leaders to address the regional and international issues.

“We believe that negotiation is the sole way to resolve the regional challenges,” he stressed.

The event, scheduled for December 18-21, will be attended by 400 international figures including 250 world leaders and political personalities from 52 countries. Participants are supposed to discuss the most important challenges in the Islamic countries and major subjects of the Muslim World.

Rouhani will then travel to Tokyo to hold talks with Japanese Prime Minister Shinzo Abe.

The president said his visit to Japan will be focused on bilateral ties in the continuation of busy diplomatic talks between the two countries in the past months with the aim of reaching an understanding and improvement of peace and stability in the region.