Iran to force US to undo sanctions

TEHRAN (defapress) – Iranian President Hassan Rouhani described the US sanctions as a lose-lose approach that Washington will be forced to abandon.
News ID: 79606 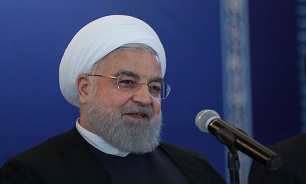 “[Imposing] sanctions is a lose-lose approach and needs to stop in a point; I believe sanctions cannot continue as it is an illegal measure,” Rouhani said on Wed. while addressing a host of Iranian nationals residing in Malaysia.

“Americans have no choice but to return from the path that they are following and we will force them to do so with our resistance,” he added.

“Sanctions create some problems but they can be turned into opportunities if we show resistance,” he said, adding, “today, everyone knows that the US withdrawal from the JCPOA has benefited nobody, even America, and its friends.”

“The US and the Israeli regime were seeking to isolate Iran and to make Iranian people lose their patience and stand against the Establishment through ‘maximum pressure’; however, despite hard economic conditions caused by unfair sanctions which are even targeting food and medicine, the nation has resisted and turned the enemy’s maximum pressure to opportunities.”

Rouhani said that during his tenure, the Islamic Republic made it clear to the world that it considers dialogue as a solution for the differences as proved in the case of Iran nuclear deal.

The Iranian President departed for the Malaysian capital city of Kuala Lumpur to participate in a summit Islamic countries leaders. Rouhani will next pay a visit to Japan.

US, under the Trump administration, has imposed unilateral sanctions on Iran’s economy after withdrawing from the Joint Comprehensive Plan of Action (JCPOA) in May 2018. Washington hopes for a better deal with Tehran but Iran has always highlighted that there will be no negotiations until unfair sanctions are removed and Washington fulfills its commitments under the UN-endorsed JCPOA.