Iran condemns any pressure on Qatar 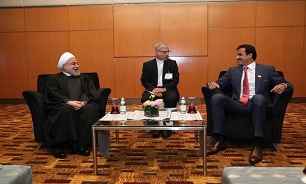 He made the remarks on Thu. in his meeting with Emir of Qatar Sheikh Tamim bin Hamad Al Thani on the sidelines of Kuala Lumpur Summit and emphasized the need for broadening and expanding bilateral ties between the two countries.

“We are witnessing the growing of ties between Tehran and Doha by the day," Rouhani said, adding, "Iran will stand by Qatar and condemns any pressure and bottleneck created against this Arab country."

He went on to say that Qatar should use the opportunity of proximity for the development of trade and economic ties with the Islamic Republic of Iran, adding, “the two countries of Iran and Qatar enjoy high potentials and can cooperate with each other in various fields.”

In the current economic situation, Tehran and Doha can fulfill many of  their demands, he said, adding, “in addition, Iran is ready to establish cooperation and collaboration with Qatar in joint investments.”

For his part, Emir of Qatar Sheikh Tamim bin Hamad Al Thani expressed his happiness to meet with President Rouhani and said, “the relations between the two countries are special and in the current situation, the two countries should enhance their ties for regional stability.”

He hailed Iran’s stance with regards to sanctions imposed on Qatar and added, “Iran’s position is appreciable in this regard and we will not forget it.”

Elsewhere in his remarks, Emir of Qatar emphasized, “we believe that the two countries of Iran and Qatar can overcome sanctions imposed on them successfully.”

Iranian President Hassan Rouhani traveled to Malaysia on Dec. 17 at the head of a high-ranking political delegations for attending attend a conference for leaders of the Islamic countries at the official invitation of Malaysian Prime Minister Mahathir Mohamad. President Rouhani is scheduled to leave Malaysia for Japan on Dec. 20 and meet with Japanese Prime Minister Shinzo Abe for broadening bilateral ties between Tehran and Tokyo.