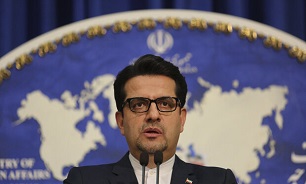 “The resolution on the human rights situation in Iran is based on a selective and biased approach with political aims; we condemn it and consider it void,” Mousavi said in a Thursday statement.

The remarks came as the UNGA on Wednesday adopted Canada-proposed draft resolution II ‘Situation of human rights in the Islamic Republic of Iran’ with a recorded vote of 81 in favour, to 30 against, with 70 abstentions.

The fact that the Israeli regime and some reactionary states of the region, who support terrorism and extremism and ignore any human rights, have supported the resolution is a ‘clear reason’ for illegitimacy of the resolution, said the spokesman.

Using human rights as a political tool and implementing double standards contradicts the sustainable improvement of the human rights in the world, he said, expressing regret that some countries are taking advantage of such mechanisms in the United Nations.

Also, an Iranian envoy in the United Nations who was present at the time of adopting the resolution, asked why the resolution on Iran should be taken seriously when Israel is among its main advocates. “Why should anyone take human rights advice from the main sponsors of this resolution?” UN website quoted him as saying. He said that the regime has promoted racism, colonialism and the uprooting of indigenous people in Palestine.

Iran’s people are struggling to protect themselves against a genocidal economic war waged by the United States, he stressed, noting that its acts of economic terrorism violate his people’s rights to food, education and life.  In the United States, “a white man’s gun is more protected than a black child’s life,” he said.