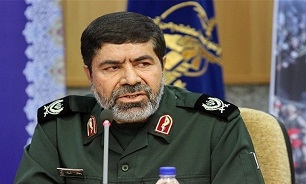 “As has been repeatedly stated, the enemies of the Islamic Revolution and the Iranian nation pursue their empty dreams and evil ambitions in falsehood and rampant propaganda through spreading false and baseless news,” General Sharif said in a statement on Monday night.

“Commander Hajizadeh is in full health and carrying out his missions,” the IRGC spokesman added.

He further said “the public opinion’s inattention” to such rumors proves that the enemies’ moves to spread lies have become “threadbare”.

In a recent report, the Britain-based Syrian Observatory for Human Rights claimed that probably three people of Iranian nationality were killed in an Israeli missile attack on Sunday night that hit the suburb of Aqraba and the nearby Sayyida Zeinab neighborhood.

In recent years, Israel has carried out hundreds of airstrikes and missile attacks in Syria against the positions of pro-Syrian forces.

Since the outbreak of war and foreign militancy in Syria in 2011, Iran has stood by the Syrian government and supported its people against terrorist groups, including Daesh (ISIS or ISIL).

Over the past years, the Syrian army has managed to liberate many of the areas occupied by terrorists and has begun the reconstruction process.