Syria, its allies have special plan to counteract US pressure

TEHRAN(defapress) – Damascus is coordinating with its allies to confront the American economic and political pressures and they have special measures to circumvent the American law, Political and media adviser in the Syrian presidency, Buthaina Shaaban said.
News ID: 79686 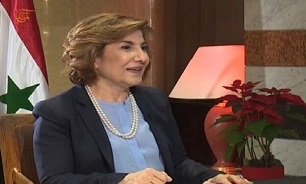 In a meeting with her within the "Game of Nations" program on Al-Mayadeen screen, she pointed out that this law affects Russia and Iran, and that Damascus is coordinating with its allies to confront the American economic and political pressures, and they have special measures to circumvent the American law, stressing that there is a correlation between Caesar’s law and the strategy of maximum pressure against Iran, and what is happening in Iraq and Lebanon.

Shaaban, stated that Syria is studying the possibility of filing an international lawsuit against the United States because it is plundering Syrian oil, declaring that Damascus started drilling for oil with Russian companies.

She revealed that the Idlib battle began, and the Russian aviation supports the Syrian army, explaining that the battle stops or continues based on the military situation, and has nothing to do with what is going on in Libya.

Shaaban stressed that the Caesar figure that the American law relied on is fabricated such as the issue of the chemist, the white helmets and others, noting that it is a criminal and unjust law, which is an episode of the series of pressures on Syria that started in 2011, and Damascus will face it severely.

She added that Syria is working to have self-sufficiency in all fields, and Caesar's law will not affect the Syrian economy, pointing out that her country has become accustomed to facing challenges, for example the number of drug factories has doubled during the past years.

The political and media adviser in the Syrian presidency denied that the high dollar exchange that the country has witnessed in the past weeks is that it has to do with Caesar's law or that it has a relationship with the economic crisis in Lebanon, explaining that this is linked to banking speculation only.

She said that Caesar’s law did not bring new anti-Syrian war, and part of it was a psychological war against the Syrian people, noting that the American administration believes that through the maximum pressure Damascus will abdicate and mortgage its political decision.

She accused the United States of preventing the return of the displaced Syrians to their countries due to the strategic accounts of "Israel" and Washington, stressing that the Organization for the Prohibition of Chemical Weapons lost its credibility after the lies that had been exposed, which are under US control.

"It was our political support and advising role that caused the defeat of the United States, its Western and Arab allies, as well as certain regional states, in Syria, and the defeat of Takfiri terrorists in Syria’s Aleppo and Iraq’s Mosul," Top Military Aide to the Iranian Leader, Major General Yahya Rahim Safavi, said.

"The US is incapable of changing the strategic face of the region and the world in its own favor," he said, adding "all developments in China, Russia and India are taking place against the US’ interests."