Russia Calls for Broadening of Bilateral Ties with Iran 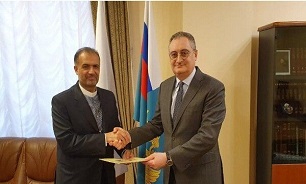 Vladimirovich wished success for Iranian ambassador during his mission.

During the meeting in Moscow on Wednesday, Jalali delivered a copy of his credentials to Vladimirovich.

Sanayee described the development of Iran-Russia political and security relations after signing of the Joint Comprehensive Plan of Action (JCPOA) as unparalleled, adding that the bilateral ties have yet to use all the potentials to further develop.

He made the remarks in a panel at the Institute for Iran-Eurasia Studies (IRAS) in Tehran in January.

At the panel, Sanayee first addressed the latest status of relations between Iran and Russia in political, economic and cultural fields, saying relations between the two countries have undergone a major transformation as a result of the growth of mutual needs and regional conditions.

According to Sanayee, since the signing of the 2015 nuclear deal also known as the JCPOA, economic relations between Iran and Russia have multiplied, but the developing relations have yet to reach the desired levels using potentials.