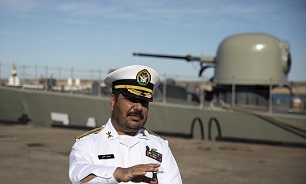 He made the remarks at a briefing on Iran’s joint naval drill with Russia and China currently underway in the northern part of the Indian Ocean. The briefing was attended by commanders of Russian and Chinese units participating in the drill.

“The common nature of maritime threats and political developments between the governments for taking coordinated measures have led to closer cooperation between the naval forces of these three countries,” the deputy commander said.

“Establishing full security of shipping lines in this region, especially in the area between the three straits of Hormuz, Malacca and Bab al-Mandeb, known as the Golden Triangle, guarantees the economic interests of all on the world stage,” he added.

He went on to stress that “many countries have active shipping lines in the vicinity of Oman Sea and the Indian Ocean, which are considered key areas of world trade, and therefore, it is critical to maintain maritime security in this region.”

He further said that the joint naval drill between Iran, Russia and China, codenamed "Marine Security Belt," is especially aimed at raising combat readiness, achieving collective security and exchanging experience in the field of combatting terrorism and piracy.