TEHRAN (defapress) – Iranian Foreign Minister Mohammad Javad Zarif referred to the recent naval drills between Iran, Russia and China, which wrapped up Sunday, saying such cooperation shows that some major powers are against any tension in the region.
News ID: 79727 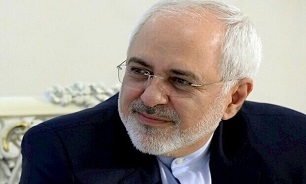 Noting that there are "other countries, among major world powers, which oppose provocative policies in this region," the top diplomat added that "this joint exercise also shows that Iran is willing to cooperate with other countries to ensure the security and the free passage of maritime traffic in the important international waterway of Hormuz."

He made the remarks upon arrival in Russia’s Vnukovo airport on Sunday night for a meeting with his Russian counterpart, Sergei Lavrov.

Iran, Russia and China held a joint naval from Friday to Sunday in the Sea of Oman and Indian Ocean with the aim of promoting the security of international trade in the strategic regions, as well as sharing experience among participants against piracy and marine terrorism.

The drills came amid the United States’ efforts to set up a so-called international maritime coalition in the Persian Gulf following a series of suspicious attacks on passing takers in the waterway it blamed on Iran.

Tehran has firmly rejected the accusations, describing the incidents as "false flag" operations.

Also, in his remarks on Sunday, Zarif said that Tehran and Moscow enjoy close ties and that his current visit to the country is his 28th trip during his six and a half year tenure as foreign minister.

"We [Iran and Russia] have strategic ties and it is therefore required to have constant cooperation and consultation regarding various regional and international issues," he said.