TEHRAN (defapress) – American combat helicopters flew continuously over the Green Zone in Baghdad on Thursday, under the pretext of protecting the US embassy in the capital, Baghdad.
News ID: 79756 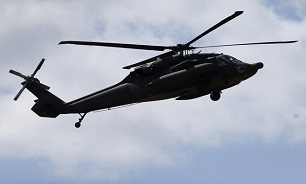 According to Al-Mayadeen TV, the American military helicopters flew continuously over the US embassy in Baghdad on Thursday before leaving the Green Zone and flying east of the capital.

The Green Zone, a 10-square-kilometer area in central Baghdad, is home to a large number of Iraqi government officials and foreign diplomatic missions, including the Iranian Embassy.

Al Mayadeen correspondent said that a Black Hawk had flown over the Iranian embassy in Baghdad before leaving the Green Zone.

He considered that the flight of these helicopters is part of the American military reinforcements that were recently sent to Baghdad.

The reinforcement comes after thousands of angry Iraqi demonstrators gathered outside the gates of the compound this week to condemn Washington’s fatal military aggression that targeted Iraq’s Popular Mobilization Units (PMU), killing at least 31 Iraqi forces.

The angry protests managed to reach the US diplomatic mission which is located in Baghdad's heavily fortified Green Zone, before the PMU, in a statement on Wednesday, urged Iraqis to stop their protests and leave the area.